It's so cool to pick and eat the greens, so fresh. I also like the fact that the produce doesn't have to be washed!

Week One: November 15, 2019
Planted seeds into rock wool cubes. Most sprouted within days. When roots began to show 10 days later, the pods were placed into the Aerospring unit (holds 27 plants). Photo below of plants showing roots was day 21. Rock wool and perlite are provided with unit.
​Water is pumped to the top of the tower and showers over roots, using a standard aquarium pump (provided). It comes with two smart timers to run the pump on for one minute every half hour, and the lights for 18 hours a day, however I opted to use an analog lamp timer for the light. The low watt fan runs 24/7. I ordered my seeds from Seed Savers. (List of seeds used below.)
Week Three
​Picked a few leaves for my first smoothie. A few days after that, enjoyed my first salad. 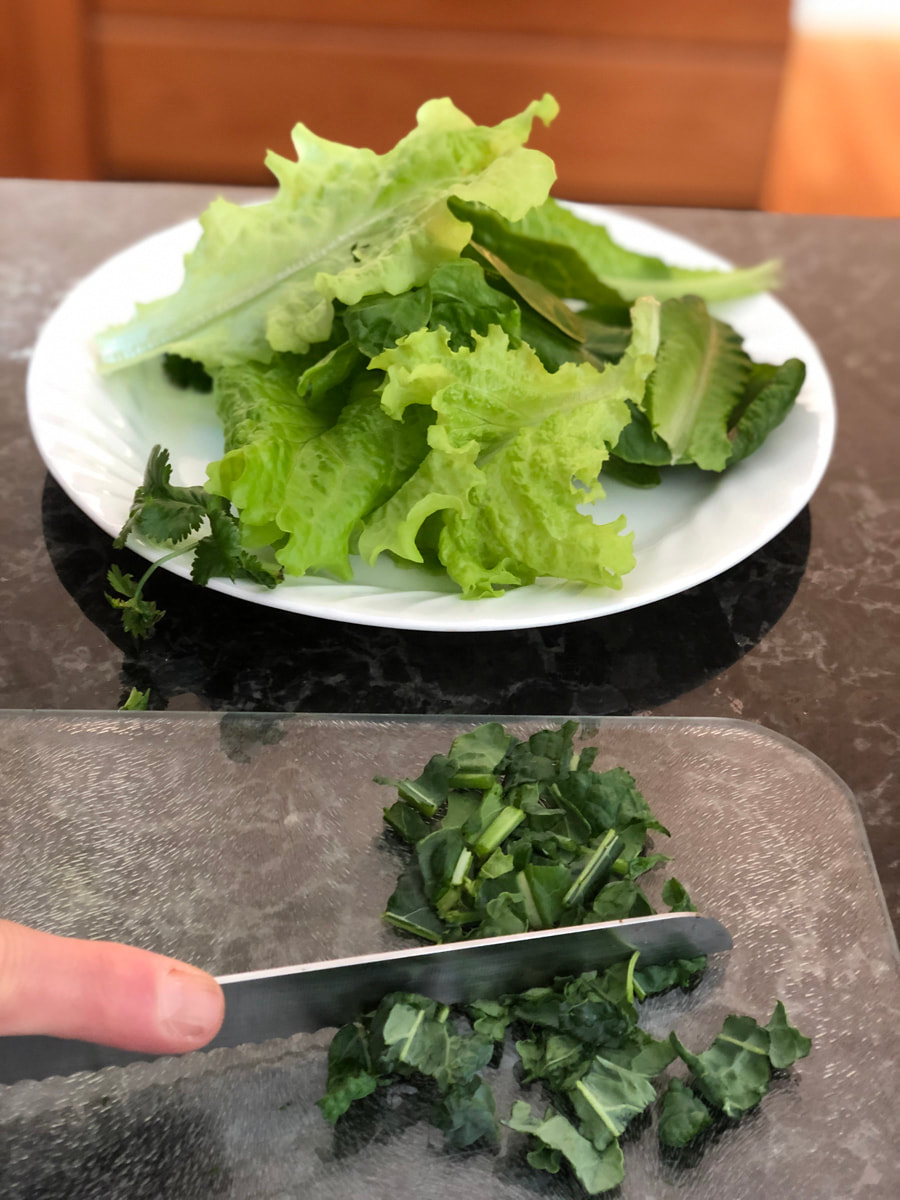 Week Five
Pea pods are starting to form. With two plants, I estimate that I harvested only a couple dozen pea pods. Not really worth the space it took to grow as I had to weave a trellis for the peas. It's more for fun, as in my outdoor garden, I plant peas to nibble on while weeding. Spinach and arugula already starting to flower, so started pruning. 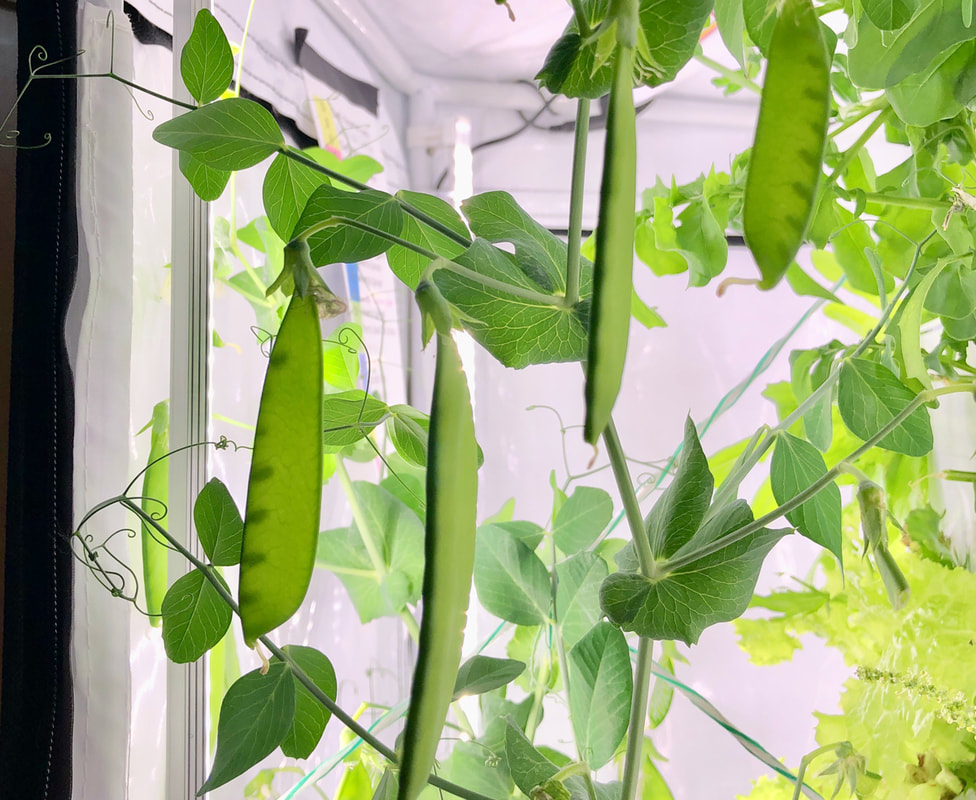 ​Week Six
Changed the water. I was dreading this but it really isn't so bad if you have a sink or drain nearby. John is shown here using the green connector (provided) to connect the hose from the pump to a spare dehumidifier hose and emptied it into a sink in the laundry room. It emptied in ten minutes. You can also scoop water out. The tank holds 20 gallons, and I worried about the fresh water as we have a well and it's cold. The green pepper leaves turned yellow and a few of the other plants seemed shocked after I changed the water. Next time, I'll drain the water outside and refill using water allowed to come to room temp in the utility sink.
Week Eight
I noticed that the water was low, added around 6 gallons with a capful of each fertilizer A&B. As the plants flourished, the unit used a lot more water. I added around 6 gallons twice a week! The amount of roots inside the tower and in the tank was surprising.
Plant Selection Notes
Because leafy plants' life cycle are shorter than tomatoes and peppers, it may be better to stick with plants with a similar length to harvest. I've just started my second batch of seeds, mostly lettuce, kale and herbs. The tomatoes did very well, but took so long that nothing else was left in the unit by March 30, or week 20. The tomatoes and peppers began flowering in week 7. Week 9, I gave a bag of arugula away. It does very well in this unit. Week 10, there were tons of flowers and little cukes forming on the Bushy Cucumber, however they all dried up and made a big mess. In the end, after 4 months, I ended up with only two small green peppers, the plant had developed spider mites which is something I have seen in my house in the past on a lemon tree.
Cleaning, Maintenance & Supplies
Daily picking, pruning, general cleanup. The LEDs are so very bright, it must be good to stand in the bright light! Every six weeks drain water and refill. Takes about an hour. After four months, disassemble tower, scrub and bleach (1/2 cup per gallon) parts. This took me about five hours.
The flowering plants (tomato, peas, peppers and especially cukes) made a mess as they shed flowers. I had to wipe and vacuum the debris from inside and under the unit. As the plants came to he end of their life, I pulled them out and put them in the compost bin. If you're squeamish, you may not like handling the roots! See photos below.
It's best to place the unit near a drain or work sink in a room with a floor that can handle water spills. It should not be placed in an unheated room during the winter.
Lettuces produced leaves for around 18 weeks. Aerospring is in Singapore; they have been very responsive with any questions I have had. The original kit came with rock wool and fertilizer that lasted for the duration of this first garden. For more supplies they recommended General Hydroponics FloraDuo A&B fertilizer, and Grodan A OK Rockwool Stonewool Hydroponic Grow Media Starter Cubes Plugs - 1.5" x 1.5.
​
List of seeds used: Chef's Gourmet Spicy Lettuce Blend, Aunt Mae's Bibb Lettuce, Parris Island Cos Lettuce, America Spinach (wasn't as successful), Lacinato Kale (was still going on week 20 but I would try a different kind), Sutton's Harbinger Pea, Cilantro, Thyme, Gian Italy Parsley, Large Red Cherry Tomato, Bushy Cucumber, Garden Sunshine Pepper, Red Sails Lettuce.