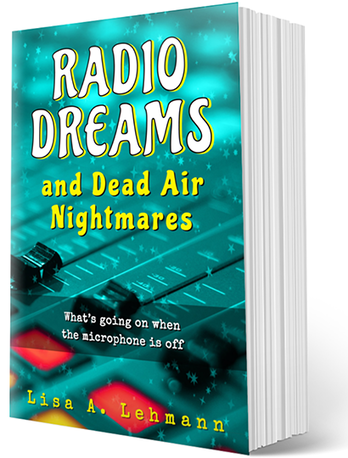 There’s a certain cachet to working in radio—​even in a small market. A glittery, ephemeral energy; an excitement of something yet to come.

"It’s a unique take on radio written from a realistic but still joyous perspective. It all flows—the ups and downs, the self-doubt, elation, marital strife, and 'inside radio' elements which are described in a way that's interesting to both radio types and avid listeners. By the way, I still have radio nightmares."
​ ~ Lee Harris, Morning News Anchor, 1010WINS - New York

​“Radio Dreams and Dead Air Nightmares” is the story of Eva LaVette, a young woman growing into her career, struggling to find out who she really is while taking on the identity of different radio stations from Jazz to Lite music, from Country to Polka. On the entertaining side, it's a peek at what’s going on when the microphone is off—from how radio works to the pranks, contests, music, and subtle misogyny behind the scenes—​a radio roller coaster of comedy and calamity in an ever-changing, sometimes punishing medium.

The story is a smart, fast-moving, coming-of-age tale like "Sweetbitter" by Stephanie Danler, but set in the fleeting world of radio. The friendship story about women in broadcasting is similar to "Firefly Lane" by Kristin Hannah. It's "WKRP in Cincinnati" meets #MeToo. The novel is 93,000 words and was edited by Christopher Chambers, editor of the Midwest Review. Lisa is currently writing the second book in the planned series of three.

​“I’ve always loved debut novels, but not every relationship lasts. This one did. I adored this book and can’t wait for the sequel. The author nailed it!"
~ Liane Hansen, retired NPR Weekend Edition host, winner of Emmy and Peabody awards
Overview
​Two years after college, Eva LaVette finally gets a shot at her radio dream, but the allure quickly fades as she experiences the loneliness and boredom of working overnights for low pay. Disenchanted, she hangs on to her goal of being a news reporter, and as Lizzie Taylor, pretends to love the "lite" music she must play. Meanwhile, her friend and mentor, Coco, lives the rock radio fantasy, fearlessly navigating her way to bigger markets across the country. The girls lean on each other through their ups and downs on the airwaves.
When Eva unexpectedly lands a spot on a zany and popular morning show, she finally experiences the exhilarating side of the business. She blithely ad libs her way through it all as she enjoys being a celebrity, confusing Tanya Wilde—her perky radio persona—with who she is in real life. The sacrifices she makes to succeed take a toll on her relationships with family, friends, and her husband Luka, who works opposite hours and cares for his ailing mother. When Eva is abruptly fired, she feels as if she's lost her identity. But radio plays both a true love and a bad boyfriend; she finds herself wooed once again.
At a country station, after paying her dues on weekends as Belle Stevens, Eva gets promoted to news reporter, then morning show sidekick. She becomes influenced by the music—cheatin' and drinkin' songs—and when her marriage starts to unravel, she’s seduced by a charming afternoon drive guy with a deep, melodious voice. The heady love affair becomes another difficult learning experience; her lies lead to an assault (ironically, dead air saves the day), a stalemate, and possibly the end of her marriage. A surprise guest on the morning show helps illuminate her mistakes and her potential. As she struggles to repair her life and figure out what she wants, Eva lives vicariously through Coco’s success. After a fresh start at a polka radio station as herself and with Coco back in town, she discovers her own voice, growing more content with Luka and satisfied with her accomplishments... Or is she?

​Music
Because Eva is immersed in her various jobs in radio, she misses out on the cliché 1980s. She plays jazz, then Lite Hits, country, and polka. Each chapter of the novel is titled with a song, but as opposed to the music she plays on the air, those songs are the soundtrack to her personal life: deep-track '70s rock through alternative rock in the '90s. Mixed into her story and Coco's are disco, grunge, punk, classic rock, Motown, bluegrass, and more.

​What advance readers are saying:​
- I'll never look at radio the same way again.​
- This was great fun to read. Engaging cast of characters, sweet insider's look at the radio and music scene, young women facing the reality of the man's world they are living in and trying to break the barriers. Well done!
- I am usually reading two or three books at a time, and for this I set the others aside. I was totally immersed in the story, pulling for Eva the entire way.
​ - I'm blown away.
Chapter Titles: Eva LaVette's Playlist
(As opposed to what she has to play on the air!)
​
1. Wavelength, Van Morrison
2. Workin’ For A Livin’, Huey Lewis and the News
3. Look Into the Future, Journey
4. Midnight Rider, Allman Brothers
5. Only the Lonely, Roy Orbison
6. Hypnotized, Bob Welch
7. Do They Know it’s Christmas, Band Aid
8. Lookin’ Out My Backdoor, Creedence Clearwater Revival
9. Like a Hurricane, Neil Young
10. Easy Livin', Uriah Heep
11. And She Was, Talking Heads
12. A Dream Goes on Forever, Todd Rundren
13. How Soon is Now?, The Smiths
14. Jackie Blue, Ozark Mountain Daredevils
15. Phoenix, Dan Fogelberg
16. Our Town, Iris Dement
17. Too Late for Goodbyes, Julian Lennon
18. For My Lady, Moody Blues
19. Heard it in a Love Song, Marshall Tucker Band
20. Foggy Mountain Breakdown, Earl Scruggs
21. Whiskey River, Willie Nelson
22. Honey Bee, Tom Petty
23. Will the Wolf Survive, Los Lobos
24. Don’t Do It, Marvin Gaye
25. Slippin’ Around, Ernest Tuggs
26. Come Ride with the Wind, Sunblind Lion
27. Spare Me A Little, Fleetwood Mac
28. Reelin’ in the Years, Steely Dan
29. Walkin’ On A Wire, Lowen & Navarro
30. Takin’ the Time to Find, Dave Mason
31. Makes No Difference, The Band
32. Don’t Shed a Tear, Paul Carrack
33. Heading for the Light, Traveling Wilburys
34. She Walks Right In (She Walks Right Out), Professor Longhair
35. Slow Turnin’, John Hiatt
36. Where the Story Ends, The Sundays
37. Right Here Right Now, Jesus Jones